“Farewell Bend: Saying Goodbye is Never Easy: Hanging Out in the Beige”

It’s been a hell of a year for many. Whew! My naturopath’s apartment burned down about thirty minutes after she woke in the night, losing everything. My friend’s daughter lost her baby eight and a half months into the pregnancy. Their distraught disbelief and helplessness moved them into enormous grief. Another couple lost their mom, brother and cousin within nine months. Holy hell, right? I’m not alone on this journey. Many of you know my favorite and best dad passed two weeks ago having a good long run on the planet. Two powerful men in my life gone in eight months.

But this is just real life. This is the messy, hard, arduous part of being human. It just is. However, like with everything else it’s our perspective that makes or breaks a situation and how we come out on the other side. That’s why I’m hanging out in The Beige. It’s incredibly neutral, goes with anything without a lot of emotional color in any direction. It’s a great place to restore our facilities and nerves and emotions and energy. It’s calming. And when the emotional clutter and barrage and onslaught of life just get to be too  overwhelming, hey! Come join me.

So where’s The Beige? How do we get there? It’s truly a space, a place in our minds that’s clear, clutter free, like ground zero. Quiet after the storm. How I access it, and I do daily, is through various entries or portals of mind-play. For me it’s through music or nature. I stare at the sky, night or day, and just gaze, drift on the wind, catch a falling star. I reach into gratitude and access the magnificence, the beauty, the bounty of what’s before me. Gratitude takes us out of the spin. I play timeless music, sing, dance, merge with the lyrical sounds, chords, notes. I peruse new music to add to my collection. It keeps me happy and in the neutral zone by staying out of the critical analytical mind or emotional spin. It also allows me process time to move through thoughts and memories and sadness by taking it one step at a time. The best news is The Beige can help with any stress zone, any change, any negatives. And we pick and choose any color we want to add when we’re ready.

This chapter of my journey has been interesting too. When Dale died he was incredibly communicative, still is. With dad, it’s been a different story. I was with him in the hospital for twenty four hours for his final leg. He was lucid, funny, gracious. The morning of his departure, I gave him a timeline too, like I gave Dale, but for another reason. My mom. We both knew it wasn’t good for her after sixty two years to see the final exit. This has always been my job. We talked about as a kid, probably around ten, I was the one in charge. And so it was. I shared with him all the people there waiting for him. He could hear their voices but couldn’t see them -again, my job. It was great to see my great grand mother again, a woman I never met in this life. Dad had quite the entourage waiting.

The timeline I gave him was noon. He had to go by twelve. He did a pretty fine job actually, as his timing wasn’t as critical as Dale’s departure. (See the first blog in February) He left his body at 1:11, an incredibly transformative number, a spiritually active portal. And it was good. He even had all the nurses with us, gently touching or holding a hand, as they’d fallen in love with him. The room was filled with goodness. I stayed with him for another two hours talking with him out of his body. Then he split.

He’s only sent a few messages but they have been good. I was playing music for him near the end. Frank Sinatra popped up, one of his fav’s, then Donna Summer’s, “Last Dance.” So poignant. My twenty first birthday we went to Tahoe to ski for a week. Donna was playing. Dad took mom and me, paid the usher extra and we sat next to the stage. He didn’t have a clue who she was, but when she started making love with the microphone he was suddenly a fan. When her song was next in line, I Knew he had a hand in it. It was incredibly direct. It just made me the laugh.

When I got home after leaving the hospital I sat on my patio to stare at the sky. I was starting my access into The Beige. A dove flew into the large juniper behind the house. It sat up there and sang, just cooed. Doves are one my favorite birds as their song takes me into memories and stories and dad knew this. I grabbed my phone to capture the message.

And perhaps the best was while texting, the auto correct went from “a little bit” to “a Lyle.” Never in any of my auto corrects have I seen Lyle. I bet you haven’t either as its not a common name or something auto correct would automatically spell. I smiled, kept “Lyle” -it’s still in my text feed- and talked to dad for awhile. I thanked him for the visit. I know the veils are thin and all the more from his view. But dad who was caged in an incredibly compromised body, isn’t hanging close by to see through the transparency, instead is off fly fishing with his buddies in the far-off clear spring-fed rivers of nirvana. 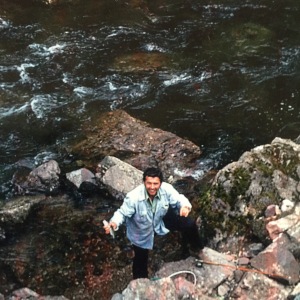 And I’m here hanging in The Beige, gently savoring the rich memories.

PS I invite you to listen to Grace Potter’s “Stars” as a great song to help process letting go.

I love life! I love the abundance, beauty, magnificence, color, emotions, prolific sensuous joys, relationships, animals, nature, spiritual "magic"- the Aliveness - of which humanness reveals. Combine that with sharp, keen intuitive insight and it's a recipe for fun in the fast lane. Intuitive since young, combined with a natural ability to heal has created an arena where possibilities are open and opportunities abound. International Intuitive and Energetic Healer, Medical Intuitive, Psychic
View all posts by Candia Sanders →
This entry was posted in Conscious Death, Cosmic Tidbits, Death and Dying, Family, Grief, Healing, healing tools, intuitive knowing, Intuitive Listening, Messages from the Other Side, Overview from the Other side, psychic insights, relationships and tagged Communication from the Other Side, communication with loved ones, Conscious Death, Dad daughter relationship, Grief, grief processing, Nothing ever really dies, saying goodbye. Bookmark the permalink.

2 Responses to “Farewell Bend: Saying Goodbye is Never Easy: Hanging Out in the Beige”