“Death is Such a Misnomer~Nothing Ever Dies: Hilarious Messages Continue”

It’s been over a year since my husband passed and six months since my dad exited his skinny body. I’m continually asked if I’m still in communication with either one? Truth is, Yes. Regularly. Dale with his perverbial comedic attitude is up to his usual tricks. Saturday night was cold. I drove into Bend with my heater set at 80. Dale’s side was always set at 65 when he was here physically. Now, both sides are at 80. Hey! It’s my car and I can be happy, right?  I was listening to my music on my iphone, keeping warm, rocking out.

I joined  some friends for some live music and dance. We were there for a couple of hours, meeting people, sharing stories, dancing. Great night. End of the evening, I jumped in the car, pushed the ignition. The “radio” was on, with a different preset, a station I haven’t  listened to for a while, and both heaters were turned down low. The passenger side was set at 63, mine was 71.  Trust me, I never have mine set at 71 ~ ever~ unless it’s the summertime. And when your car and iphone are synced, the music will automatically come back on, not go to radio.  I believe in magic obviously. However I don’t believe car dials can just change randomly without some help. This has been the continual go-to connection, electronics, because I feel they are  the most easily accessed conduit between the worlds. My son and I are still talking about that otherworldly app.

Okay funny! Right now as I’m writing this, the previous sentence was repeated, word for word, below. Getting messages Now as I write! Electronics again.

Easily accessed conduit between the world. My son and I are still talking about that otherworldly app.

This is how easy it is to communicate when we pay attention to the signals given regularly. They’re obviously different than picking up the phone or hugging, however they’re just as real.  I never feel alone. My dad too checks in as he and I were so amazingly close my entire life. Honestly I spend 98% of my time alone yet never feel that to be my reality.

I have another story to share, however, it’s not mine. It’s a Dale story though.  Last August, a family friend came to visit from Canada. Our families have known one another since I was a teenager.   We had made an agreement years before that if we were ever single at the same time we would let each other know. The timing lined up. He came to share my son’s and dad’s birthday celebration (my parents were thrilled) at my cabin. Mr. Canada decided that he could swim across the lake with the kids as he was feeling all spry and spunky. I don’t think that he factored in cold water, wind, and the distance. As he was swimming he became incredibly tired and winded. At one point he even thought he wasn’t going to make it – seriously. At the most critical juncture, Mr. Canada while struggling, had an inspiration, this tap on his shoulder if you will, to stop right there in the far reaches of the lake and put his feet down. You have to understand he’s out in the middle of the lake he’d never swam in before. He discovered a very small piece of sand maybe 6 inches wide. After that the sand dropped away into deeper depths. His feet and toes gladly rested while his breath returned, regaining a sense  of equilibrium before he headed back towards the cabin. He admitted he felt it was Dale who saved his life. The decision at that moment to find ground was an overriding emotion triggered from a source who knew the lake. Dale helped him from where he was/is in the universe. Pretty damn special ~ because as he did, he was helping me, the family, as Mr Canada is in our lives now. It was only one week later dad jumped this plane.

Isn’t it grand the possibilities, the truth of what’s available, if we listen with our hearts?

PS as I’ve typed in a title several times, it’s erased, literally erased and I have had to start all over. Again. And no, it’s not some virus as I bought a new device. It’s hilarious! Thx Dale. Maybe there’s some help from dad too.

Addendum: I’ve been looking for trip photos from 2012 when Dale and I took a month camping in the back of our truck, before camper days. The last hurrah was Banff. I introduced Dale to Mr Canada. I took pictures to mark the event. I’d scanned my phone and my iPad for photos from that part of the adventure; nothing. Two days ago I was reminding Mr. Canada of these pictures and mentioned I thought they were stored on my dismantled computer. Last night, out of No Where, there they were, all seven photos – on my phone like they’d been there all along ~ randomly~ as there are no other photos from 2012 Canada and Banff. So you tell me?! 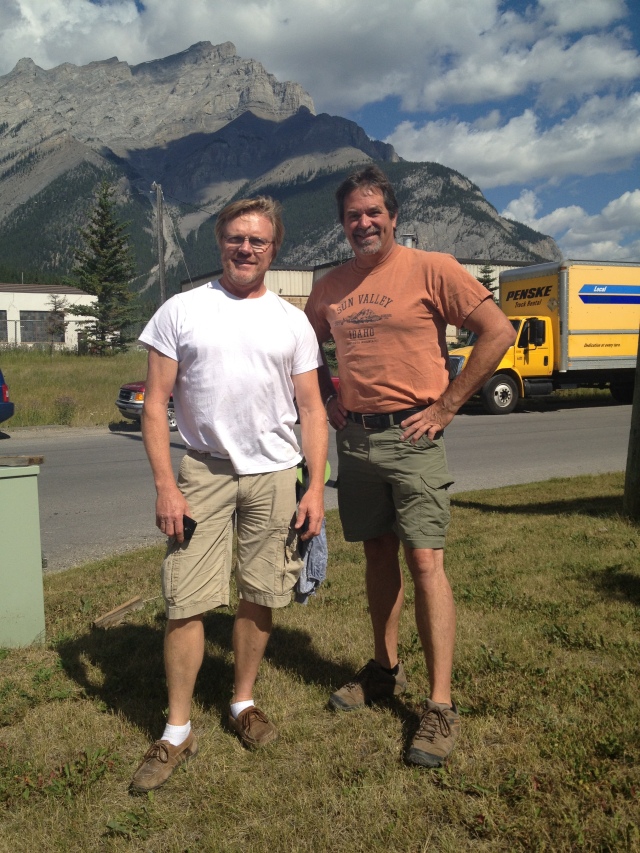 Every time I mention or say something, find something, that person or connection shows up almost immediately. Now not all of this is Dale, he’s about the things and events related to him. The rest is the synchronicity of the universe. Magic baby! Magic!

Our loved ones are always with us. Never feel communication isn’t possible, because it is.

Candia Sanders is an International Medical Intuitive, Healer, Author and Speaker -an Eternal Optimist- who has helped countless thousands of people ease their medical issues, navigate important relationships and find their soul’s purpose and life direction. Candia is also the author of the transcendent new book, “Soul Rays: Discover the Vibratory Frequency of Your Soul“.

I love life! I love the abundance, beauty, magnificence, color, emotions, prolific sensuous joys, relationships, animals, nature, spiritual "magic"- the Aliveness - of which humanness reveals. Combine that with sharp, keen intuitive insight and it's a recipe for fun in the fast lane. Intuitive since young, combined with a natural ability to heal has created an arena where possibilities are open and opportunities abound. International Intuitive and Energetic Healer, Medical Intuitive, Psychic
View all posts by Candia Sanders →
This entry was posted in Conscious Death, Cosmic Tidbits, Death and Dying, Dreams and Portals, Grief, Healing, Healing, Health, Spiritual Concepts, intuitive knowing, Intuitive Listening, Messages from the Other Side, Overview from the Other side, psychic insights, Truth and tagged Banff National Park, Conversations with dead loved ones, Death Dying, life after death, life is short, love and relationships, New beginnings, Signs and Messages from Departed Loved Ones, Swift Reservoir Washington, trusting your intuition. Bookmark the permalink.